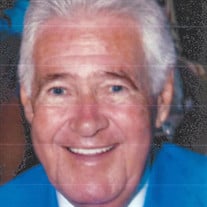 Terry Winford Chandler, 84, passed away Saturday, August 29, 2020, peacefully in his sleep, after a long illness. Terry was born July 10, 1936, in Jones Chapel, Alabama. He graduated from Cullman High School in 1954 where he played basketball and baseball and held the Alabama State record for most points scored in a single basketball game (52) for a number of years. Terry was offered a professional contract to play baseball for the St. Louis Cardinals but decided to accept a scholarship to play basketball and baseball at Auburn University, after graduating from Auburn in 1958, Terry was offered a contract to play basketball for the House of David Professional team, but he married and started his career as a high school teacher and coach of basketball and baseball. He went on to have a very successful career in insurance with Vulcan Life of Birmingham, where he received many awards for excellence, including being named Vice President at the age of 26. Along the way, he had 3 daughters, was inducted into the Cullman County Sports Hall of Fame, and retired at the age of 36 to become involved in real estate and other businesses. He remarried and had 1 son and started businesses in and, living the last 23 years in Albertville, where he was a member of First Baptist Church of Albertville. Terry loved God, his family and friends, and Auburn. He was an avid outdoorsman, he loved hunting, fishing, and sports of all kinds, especially if it involved Auburn. He loved gardening, raising cattle, raising and racing horses! His larger than life personality and presence was much loved by all his friends and family and will be greatly missed. Through the years he was able to be a positive influence on so many in his different business ventures. He is preceded in death by his parents, Grady & Dona Chandler. He is survived by his brother; Trent Chandler, his loving wife; Julie Chandler, son; Win Chandler, daughters; Jennifer Stevenson, Laurie Huddleston (Bill) & Mindy Azar (Zack), grandchildren; Madelyn Snow, Emily Macgriff, Margeaux Woods, Michael Woods, Michael Azar, & Allen Azar, great-grandchildren; Hudson Snow, Ellie Snow, Luke Snow & Thomas Macgriff. A graveside service will be held for family & friends, Wednesday, September 02, 2020, at 11:00 am at Memory Hill in Albertville Al. In lieu of flowers, donations may be made to Shepherds Cove Hospice in his name.

Terry Winford Chandler, 84, passed away Saturday, August 29, 2020, peacefully in his sleep, after a long illness. Terry was born July 10, 1936, in Jones Chapel, Alabama. He graduated from Cullman High School in 1954 where he played basketball... View Obituary & Service Information

The family of Mr. Terry Winford Chandler created this Life Tributes page to make it easy to share your memories.

Send flowers to the Chandler family.