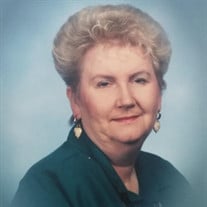 Peggy Earlene (Chamblee) Shell, 77 years old of Albertville, AL, passed from this life the morning of July 15th, 2020, at Shepherd’s Cove Hospice in Albertville, AL. Born August 21, 1942, at home in DeKalb County Alabama to John Denson Chamblee and Bernice Lucille (Stephenson) Chamblee. Her siblings were her brother, Coven Burneal Chamblee, and sister, Opal Ellowayne Chamblee Dingler. She married Arthur Adrian Shell, June 1st, 1962 at Antioch Missionary Baptist Church in Albertville. She was a proud graduate of the Albertville High School class of 1960. Over her career, she worked several jobs including Redstone Arsenal Technical Library, a substitute teacher at West End Elementary, and lunchroom cook at Alabama Avenue Middle School. She was instrumental in the reopening of the Albertville High School lunchroom in 1978 and managed it for five years. She worked for the Auburn University Home Extension service for several years, and served 20 years for Marshall County CAJA, working to be the voice for underage children in custody cases. No matter where she worked she was always fast to make friends and many of her co-workers became lifelong friends. She loved to cook and was a great cook. Being a lifelong Baptist, feeding large groups of people was in her blood. She was also an avid seamstress and would often wake up early on Sunday mornings, start cooking for lunch, cut out a new dress, sew it together, and wear it to the morning service. Of all the things she did throughout her life, the thing she did best was love and care for others. She was a loving wife to her husband, a loving mother to her two sons and two daughters-in-law, and a loving grandmother to her three grandchildren. She was constantly involved in school activities while her sons were in school. From Cub Scout Den Mother to PTA member or substitute teaching, she loved being involved and helping others and the cause at hand. She is survived by her husband of 58 years, Arthur Adrian Shell; sons: Paul (Sulynda) Shell of Albertville, AL, Raymond (Sonya) Shell of Guntersville, AL; grandchildren: Jackson Shell of Atlanta, GA; Sadie Shell of Auburn, AL; and Rylee Shell of Guntersville, AL; sister Ellowayne Dingler of Albertville, and numerous nieces and nephews. She is predeceased by her parents John Denson (J.D.) and Bernice Chamblee, and older brother Coven Chamblee. Service will be Friday, July 17th with visitation from 10:00 am – 12:30 pm at Adams Brown funeral home in Albertville, AL with graveside service and burial at 1:00 pm at Marshall Memorial Gardens. In lieu of flowers, donations can be made to Antioch Missionary Baptist Church of Albertville. The Shell family along with the staff of Adams Brown Service Funeral Home encourages anyone in attendance to keep in mind the current guidelines and restrictions set forth by the C.D.C. as it pertains to social gatherings.

The family of Mrs. Peggy Earlene Shell created this Life Tributes page to make it easy to share your memories.

Send flowers to the Shell family.